Where the journey begins...choosing to be whole 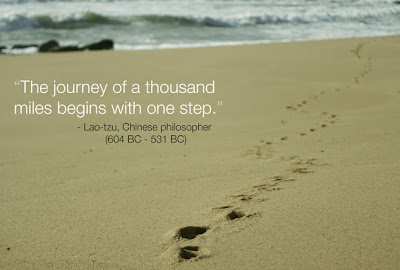 Recently I posted here about how I began to live in a state of awareness and how this was a new path in my journey out of the "dark ages" where I lived in that chronic state of emotional and cognitive distress where my mind raced uncontrollably and my thoughts kept me in a twisted and tense state of being.
Well...I wanted to "be" better.
I wanted to not be afraid of my own shadow and "get a life". I wanted to not have nightmares and flashbacks. I wanted to know how to be in relationships and be ok, to speak up for myself without panicking that I would be hurt, ignored or abandoned. I wanted to learn how to live without addiction and avoidance running my life and stealing my days.
I was exhausted. The energy that it took to live in that constant and chronic state of anxiety and fear left me drained as I struggled to make it - to survive - another day.
I was tired of simply surviving; I wanted to live.
And it started with being aware and aware that I had a choice.
And it continued by being willing and open to hearing how I had the power within myself to create my best life today. That it was never too late.
And it began with one step; simply putting one foot in front of the other.
And in that awareness I had to let go of the idea that anyone else could give me the answers or fix me.
It came down to the fact that I was responsible for finding my way out of the darkness of what has come to be known as "mental illness" and all that goes with it; the panic attacks, the nightmares, the breakdown of my physical body and the constant chronic and disabling pain that I lived in.
I had to make a decision that I was willing to do the hard work of owning the state of my life and to stop playing the perpetual "victim" card where my focus was on anything and everything and everyone who had ever touched my life and how I was in such a bad place, I had no choice, no control...
That I could get better if......something would happen, someone would listen or help me, if I got a "break" like so and so did...
I had to choose to stop focussing on others and things outside myself and begin to be aware of what I was feeling behind that huge smokescreen of blame and anger at things outside of myself.
I learned to accept that my life just is and if I don't like the way my life is going...that I can change it by simply
changing
my
mind.
Posted by Unknown at 8:00 AM

Wonderful post. I truly do believe that within each of us is the knowledge of how to heal--if we let ourselves discover it. That said, it's an easier journey if we have someone to stand by us, to listen, etc. But it begins with learning to trust and love ourselves.

Thanks for dropping by April!

Yes; it is nice if we have someone that can walk beside us although like you say...it begins with learning to trust myself.

Have your best day ever!

Hi Susan,
You say so much in this post. I am not sure where to begin commenting! I like your message of choice. A professor involved in doing a study on my blog asked me if I thought my success with recovery was my therapists model or if it was more than that, and I had to say that I thought it was a combination. My therapist was a wonderful facilitator, but I did the work. I made the choices to push, to dig deep, to wake up and take my life back. I fought the fight and in the end I won.

It is great to meet another who makes these same choices! It isn't easy, but dying wasn't easy either. Living in all that pain, oppression, turmoil and darkness was a nightmare. Living in wholeness and freedom is much easier in the end and worth the journey through the difficult times.

I am so glad that you found my blog, so that I could find yours!
Darlene

Hi Darlene and welcome to my little corner of the blog world!

I totally hear you...I wrote a post last year on "Was it worth it.." (September) that kind of states how I felt about the hard work. I had been living for too many years in that state of what I called "living death" so learning how to do the "hard work" was a much better option I thought :)

One of the first obstacles that I had to overcome was reframing the helplessness to the idea that I could. That alone was life-changing.

So glad you stopped by - I am looking forward to reading more at emergingfrombroken.com!